Posted at 16:10h in Δράσεις, Εκδηλώσεις by drita 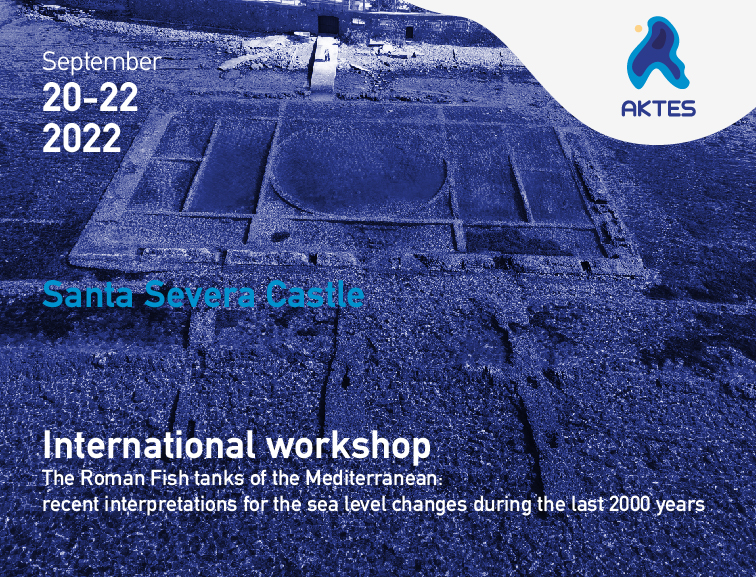 To join the online meeting click on this link:

Videos registered at the International workshop:

International workshop The Roman Fish tanks of the Mediterranean:

The Polo Museale Civico di Santa Marinella ‘Museo del Mare e della Navigazione Antica’, the Society for the Study of Ancient Coastlines (AKTES) and the Istituto Nazionale di Geofisica e Vulcanologia (INGV) co-organise an International Workshop titled “The Roman fish tanks of the Mediterranean: constraints and interpretations for the definition of sea level changes during the last 2000 years”, which will be held in person and online (hybrid) at the Castello di Santa Severa (Pyrgi, Rome, Italy) between 20 and 22 September 2022.

The fish tanks of the Mediterranean provide important insights into the aqua-culture and life-styles during the Roman period, primarily in the interval between about 200 BC and 200 AD, being carefully engineered, documented and dated in the classic histories and geographic texts of that period. A particular important feature is that for effective functionality, their construction is closely linked to the coeval tidal range and mean sea level, such that their current position relative to sea level provides a reference level for both archaeological and geophysical studies: for calibrating the relations between other archaeological structures and sea level at the time of their construction and use, and for determining the sea level changes and tectonic vertical movements along the coastal zone.

For ancient coastal constructions to be successful as accurate sea level indicators, a good understanding of the particular features that relate accurately to the local sea level is required. The Roman fish tanks are characterized by specific functional features that are associated with the sea level at the time of their construction and use, descriptions and functions of which can often be found in the Roman literary sources.  Both features and age information is available for inter-comparisons of a significant number of fish tanks and for calibrating the sea level at those sites where their key defining-features have not been preserved or reliable age information is not able to be obtained. Rising sea level, storm activity and encroaching development are threatening these Roman structures that provide unique information on the relative sea level change over the last 2000 years, making measures to protect their archaeological and environmental value paramount.